So as I was about to start writing this post, it just occurred to me that I am about to enter into the FINAL month of my exchange. Huh? How did this even happen? At the same time that I am looking forward to being able to see my family and friends again in New Zealand, it also makes me extremely sad to know that in less than 4 weeks I'm going to have to leave all of the amazing people I've met during my time here, and say goodbye to the different way of life that I have now become so accustomed to.

I know some of the photos of where I live from my last post were pretty rubbish, so when I finally found a sunny day I thought I'd take a few more:


To be honest most of my time over the past month or so has just been spent at school all day, except of course for weekends and the 2 week Christmas Holidays. But I've actually begun to really enjoy school at the moment, especially because my Spanish has reached a level where I'm able to participate in most things (ie. class presentations, tests etc.), and I'm doing really interesting subjects such as philosophy, cultural sciences and religion which I wouldn't be able to take in NZ.

One thing this exchange has made me realise, though, is how ridiculously easy most of NCEA is compared to the schooling system in Spain! 😂 Especially in things like maths and physics, I honestly reckon they're like 2 years ahead. And the thing about it is, there's no picking and choosing which subjects you're good at or struggling with - if you don't want to take the course with only languages, history and economics, you have to do everything in the other one, which includes all three sciences (or you can do graphics instead of biology), maths at a really high level, and a whole range of other subjects that you might really hate. Also, because these last two years of school are very important for university entrance, basically no one ever fails their exams - heaps of students go to extra tutoring outside of school.

I haven't been able to do most of the exams so far in any subjects which involve a lot of writing or are mostly theoretical, but I did give physics and maths a go, and while I'm still waiting for my grade back from physics, I ended up getting 100% in maths! I think I was actually the only one in my class to do that, so I'm pretty chuffed that I've been able to learn all these new concepts really quickly in another language.

Being in Spain over the Christmas period was truly an unforgettable experience, but let's just say things didn't exactly go according to plan when I decided to come down with the flu just a few days before Christmas day, and then right through the rest of the first week of the holidays... I honestly don't remember ever being that sick in a very long time. I reckon my body just didn't know how to handle the Spanish variation of the virus, but fortunately I managed to recover just fine. Because of this I obviously couldn't be a part of any of the celebrations and family dinners during La Noche Buena (Christmas Eve) or Navidad (Christmas Day), which was a bit of a bummer, but if I was going to miss out on Christmas anywhere in the world, Spain was definitely the place to do it. I say this because holidays and festivities over here are not limited to one or two days like in the rest of the world - they will dedicate practically an entire month or two to celebrating! All the cities are always really beautifully decorated with lights right from the beginning of December, and this festive spirit does not cease until later into the month of January, mainly due to the fact that they have TWO CHRISTMASES in Spain! Well, not exactly, but "Los Reyes Magos" (The Three Magic Kings), are essentially just another version of Santa Clause, who come on the 6th of January to bring the kids presents like the Three Wise Men did to baby Jesus after his birth. But then, the really weird thing is, "Baby Jesus" also brings them presents on the 24th December, so none of it really seems to make any sense!


Luckily by New Years Eve I had fully recovered, and so I got to enjoy a traditional Spanish dinner. In Spain it is almost always a family celebration with a big meal until midnight, and then younger people normally go out with their friends afterwards right until 5-6 in the morning! That wasn't really an option for me at the time, but the night was still one of the highlights for me from this exchange so far. We ate all sorts of different foods such as prawns, sea snails, barnacles and white asparagus, and then afterwards these bite-sized dessert slices from the north of the country. Later, I got to participate in the iconic Spanish tradition of the 12 grapes, were in the last 12 seconds before the New Year, you eat a grape every time a clock tower (which is in Madrid) sounds. It actually wasn't as hard as I had thought, but still turned out to be quite amusing. Straight after that, we all quickly ran out onto the balcony, and within a few moments the whole sky was lit up in a vast array of fireworks. I've honestly never seen anything like it - I'm kicking myself now that I didn't get a photo, but I kind of just wanted to enjoy it in the moment. Almost all of them were let off from balconies, but even so they were still really massive, like the ones you'd only be able to see at professional fireworks shows in New Zealand, and it kept going for almost ten minutes straight.The cool thing was also that because we live directly in front of the port, we could see the display from ever direction for miles.

Another really cool experience for me was going to meet other exchange students in Madrid and Toledo over two days in the second week of the holidays. I took the bus early in the morning from Bilbao and arrived in Madrid about four and a half hours later, where a taxi took me to our hotel. There I got to meet all of the other exchange students who had also come from outside of Madrid, and who consisted of 5 Australians, 2 Brazilians, 2 Italians and 1 German. We went out to find some lunch and do some exploring on our own, but the lady from Juventud y Cultura did end up giving us a bit of a guided tour later. We then went back to the hotel for a while, before going out on our own again to find dinner and see all of the incredible Christmas lights. It honestly felt so good to hang out with the Aussies for a while, talking in English without having to think about it, arguing whether Marmite or Vegemite is better (we all know the truth) and just being able to agree on some of the weird things they do here in Spain that they don't find weird at all! 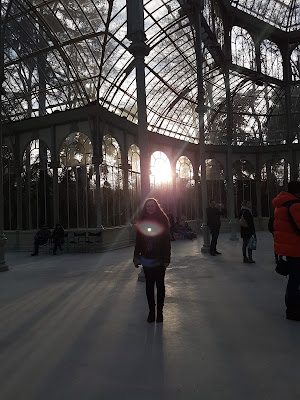 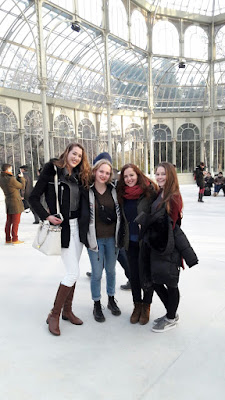 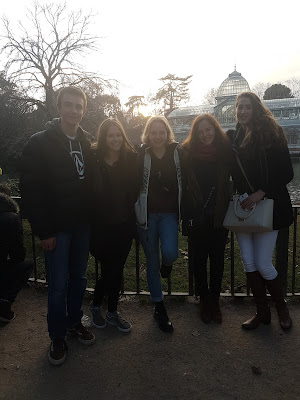 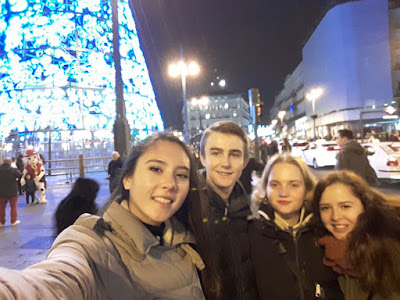 On the second day (after getting back to the hotel pretty late the night before) we had to wake up early to take the bus to Toledo, which is about an hour away. During the trip we met the other students who either lived in Madrid or very close to it, who consisted of even MORE Aussies, Germans, French-Canadians, a girl from Belgium and a girl from a country in Europe which I can't remember the name of (whoops). This time we had a proper guided tour from the bus we were in, and learned about some of the amazing history of this medieval city, which is one of the oldest in Spain. We also got to see a blacksmith at work and learn about how they make all these special types of traditional jewellery. 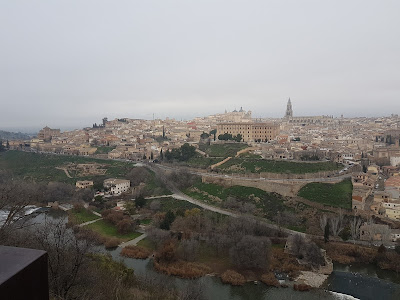 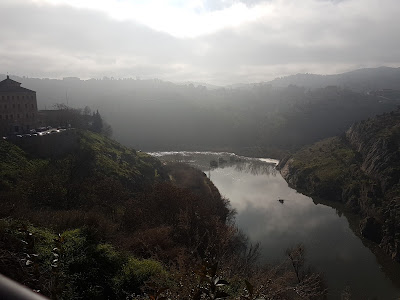 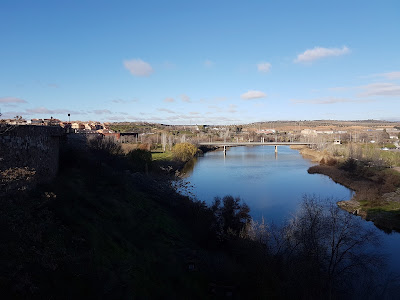 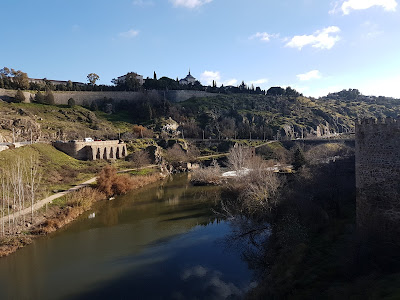 Overall it was a totally unforgettable experience, and it was just really amazing to be able to meet so many different people from totally different cultures. One thing that did surprise me though, was that a couple of the Australian girls had already been here for over 4 months, and still didn't speak a word of Spanish! I just don't understand how that could even happen... They were just sort of treating it like an extended holiday which kind of makes me a bit sad, but it was good to see that most of the other students were actually trying to make the most of this opportunity.

Other than those two days, during the whole second week of the holidays I stayed at a friends house while my host family went skiing, which once again led me to discover a set of cool new things about Spain. One of these was baking a cake with the help of an old lady who still uses a balancing scale to weigh out all of the ingredients!

I also got to go to the top of El Puente Colgante, which was a lot higher than I expected, and you could see practically the whole of Las Arenas. 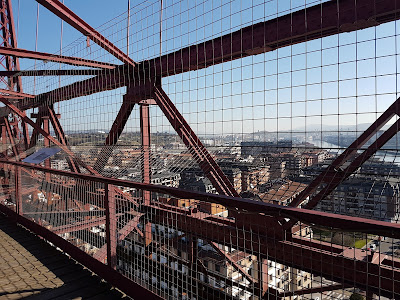 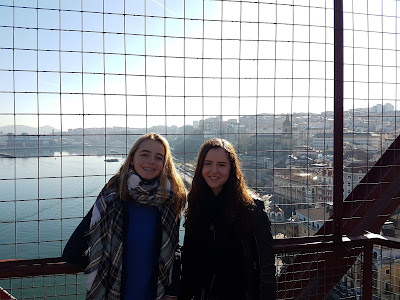 I was with their family on the day of Los Reyes Magos, and because my friend's three younger sisters still believe that they exist, some family friends came dressed up in the middle of the night with painted skin and in Arabic clothing to surprise them, which was honestly kind of scary but something I will never, ever forget. It was just the coolest thing I've ever seen done for children! Unfortunately I don't have any photos, but there is a video that I'll try to get a hold of some time.

On that day we also went to quite a fancy restaurant with views of the harbour and a rooftop terrace. 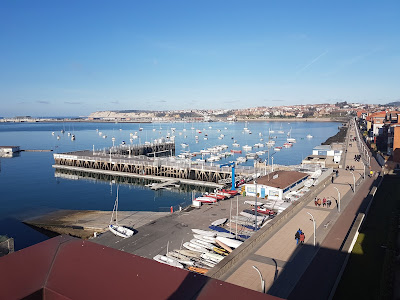 Like I said before, most of my time at the moment is spent at school, but during the weekends me and some of my friends from school also go out to Bilbao or to the beach and stuff like that, which is always really fun and I'm honestly so sad to be leaving them so soon. They've been a really integral part my experience here, and I reckon that without them my Spanish would not have improved so much as it has, because I feel so comfortable just giving things a go around them. 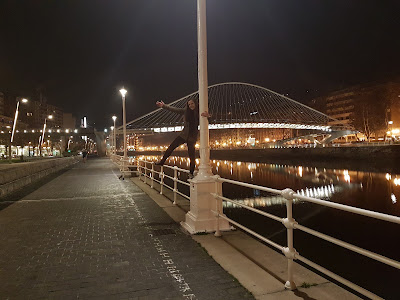 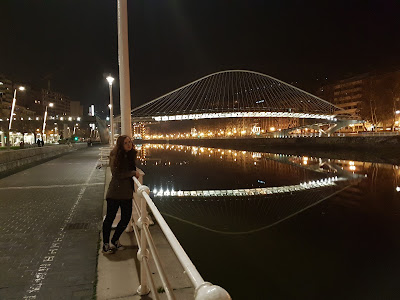 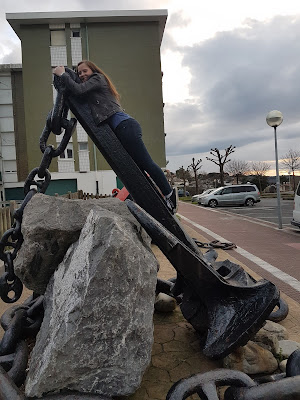 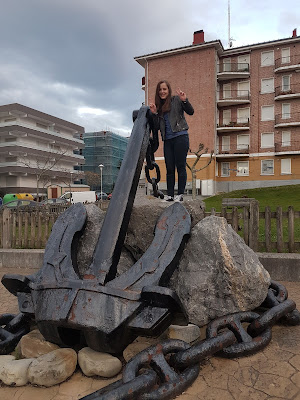 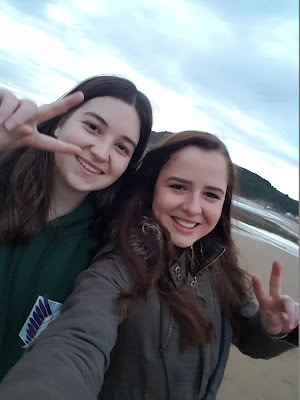 Just recently at school we also had a day to celebrate Mary ward, the founder of our school, in which we all got to dress up in themes for each class, so I thought I'd show a few pictures from that because it was so much fun! 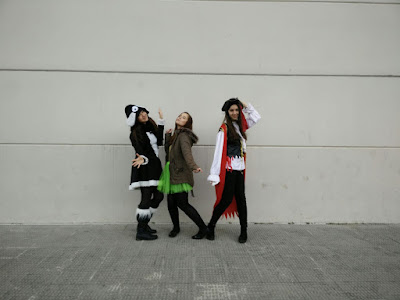 But anyways I think I've included just about everything that I've been up to since my last post, so I'm not really sure what else to say! There'll be one final one right at the end of my exchange, but until then, hasta luego!!!! (That doesn't really make sense but oh well...)

Posted by Unknown at 9:58 AM No comments: